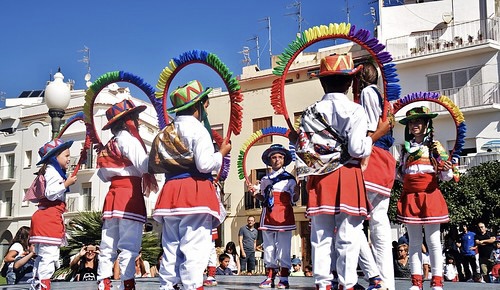 Santa Tecla is coming back!

After the main festival of summer, most of the habitants and tourists of Sitges have already returned to their corresponding routines and said goodbye to the holidays until next year. However, the September party is about to arrive and, even though we have entered into the life of work and studies, each year it gives us that last summer memory to be able to endure all winter with energy: Santa Tecla!

If you still didn’t know this party, we think that the best way to describe it is like a reduced and familiar version of the August festival. Being September, the spectators are reduced to habitants of the town and surroundings since most of the tourists have left, and therefore it becomes a much more comfortable, quieter and therefore more pleasant party, especially for the children.

All the popular dances and all the groups that act in the main party act but also join the children’s groups, which have been practicing for months to execute their best outings. Apart from the traditional, there is also a long list of related and parallel activities such as concerts, workshops, vermouths… for more than a week!

You know what to do if you want to end your summer as it should. We’re waiting for you!

Carnival is making its way to Sitges!

Everything 2023 is holding for us

The “Quinto”, our tradition